A device that uses TOF technology to image is called a TOF camera (or TOF camera) The TOF camera has similarities with the ordinary machine vision imaging process. It is composed of a light source, an optical component, a sensor (TOF chip), and a control circuit. > and several components such as processing circuits. This technology is basically similar to the 3D laser sensor, except that the 3D laser sensor is a point-by-point scan, while the TOF camera obtains the depth information of the entire image at the same time. 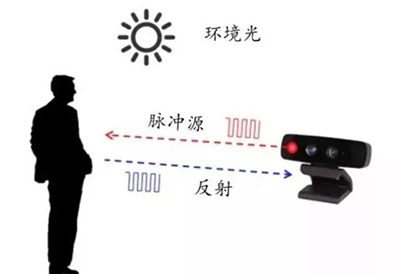 TOF cameras have fundamentally different 3D imaging mechanisms than binocular measurement systems that are very similar to non-intrusive 3D probing. The binocular stereo measurement is matched by the left and right stereo image pairs, and then the triangulation is performed by the triangulation method, and the TOF camera is obtained by the target distance obtained by the injecting and reflecting light detection.

TOF technology uses active light detection, which is different from general lighting requirements. The purpose of the TOF illumination unit is not illumination, but the use of incident light signals and reflections. The change of the optical signal is used to measure the distance. Therefore, the irradiation unit of the TOF performs high-frequency modulation on the light before transmitting.

Like a normal camera, the TOF camera chip front end needs a lens that collects light. However, unlike ordinary optical lenses, a bandpass filter is required to ensure that only the same wavelength as the illumination source can enter. At the same time, since the optical imaging system has a see-through effect, the scenes at different distances are concentric spheres of different diameters, rather than parallel planes, so in actual use, subsequent processing units are required to correct this error.

As the core of the TOF camera, each pixel of the TOF chip records the phase of incident light back and forth between the camera and the object.The sensor structure is similar to a conventional image sensor, but more complex than an image sensor. It contains 2 or more shutters to sample reflected light at different times.

For this reason, the TOF chip pixel size is much larger than the average image sensor pixel size, generally about 100um. Both the illumination unit and the TOF sensor require high-speed signal control to achieve high depth measurement accuracy. For example, a 10 ps offset of the sync signal between the illumination light and the TOF sensor is equivalent to a displacement of 1.5 mm. The current CPU can go to 3 GHz, and the corresponding clock period is 300 ps, and the corresponding depth resolution is 45 mm. The arithmetic unit mainly performs data correction and calculation work. By calculating the relative phase shift relationship between the incident light and the reflected light, the distance information can be obtained.